What You Need to Know about Weapon & Firearm Charges 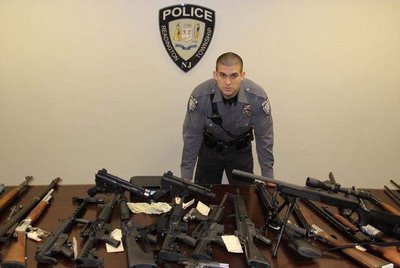 New Jersey has extremely severe penalties for firearm and weapon violations that are harsher than those of many other states. A weapons conviction can significantly decrease your chances of attaining employment, impede your ability to gain entry to schooling or find housing.

In many of these circumstances, you’ll either be charged with a third-degree crime or a fourth-degree criminal act. Although if it’s combined with other criminal acts as an armed robbery, the degree can be lower and carry far greater consequences.

A majority of our clients were simply in the wrong place at the wrong time. Maybe you were transporting weapons between states, unaware that it was illegal. Perhaps you discharged a firearm in a way deemed improper according to police officers. However, this is not always the case and more serious offenses occur.

We can also represent people charged with armed assaults, shootings, property break-ins and frequently other violations that can land you in prison for the foreseeable future. Robbery or burglary convictions typically carry a five-year prison sentence, but it can certainly be longer in some instances.

In New Jersey, punishment for gun and weapons crimes are far more severe than that of many other states in our nation. Here at Simon Law Group, the criminal defense lawyers serving Hunterdon County, we have extensive knowledge when it comes to these violations, and can, therefore, provide the representation our clients need when charged with any type of weapons crime throughout New Jersey.

If you’ve been charged with a weapons violation, it’s imperative to contact us as soon as possible to begin our work.

Additional Tickets You May Get When Charged with a DUI

Spring is finally arriving in New Jersey, and with it comes an upswing in the amount of DUI's/DWI's...

Child Support Through Direct Pay or Probation, Which Works for You?

It can often feel like modern life is the constant search for more time to spend on the things...