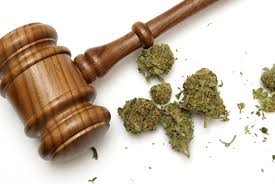 A Gallup poll released in October showed that 64% of Americans favor the legalization of marijuana, the highest percentage ever. Eight states have already legalized the sale and distribution of it. During the recently concluded race for Christie's governorship, legalization was seen as a major ballot issue.

The popular zeitgeist aside, an important recent appellate decision in the superior court of New Jersey may be pushing the issue forward here at home. In a 2-1 ruling the majority wrote NJ’s Division of Consumer Affairs (DCA) must reconsider the status of the plant as a Schedule 1 substance. The opinion went so far as to say the potential health benefits are “abundantly and glaringly apparent."

The origins of this decision are rooted in a 2014 petition filed by inmate Steven Kadonsky who was arrested for marijuana trafficking. He asked the NJ DCA to think about rescheduling the drug due to New Jersey legalizing medical marijuana.

A Schedule 1 narcotic is defined by it having no accepted medicinal benefits, such as heroin or MDMA. Scientific research has suggested that there are several potentially therapeutic uses for marijuana, including but not limited to control of nausea and reduction of muscle spasms.

The appellate court ruled that the DCA was incorrect in saying he had to defer to the federal governments ruling. Both have the drug listed as a Schedule 1. There are also steps being taken to have it rescheduled in federal court.

A spokesman for the attorney general says they plan to appeal the decision.

If you are seeking representation for a possession of marijuana charge, or an intent to sell call today for a free consultation 800-709-1131 or fill out acontact form on our website for a no-cost consultation.We hope to hear from you today!

When (if) the state creates a risk to ones safety, the State may be liable. It's a basic premise...

A standard of New Jersey family law was overturned on Tuesday in a unanimous decision.  For sixteen...

Not every potential client we sit down with has a sordid tale of betrayal and misery that led them...