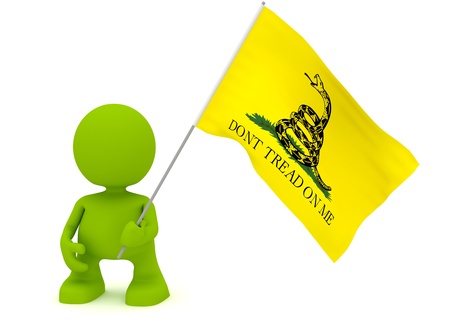 The US Equal Opportunity Commission, among its many other functions, determines the basis of claims as they pertain to workplace harassment. Through what they feel is the proper application of existing court rulings, they’ve already determined that wearing a Confederate insignia to certain workplaces is punishable by law and considered harassment. Now, the Gadsden flag, first used in the American Revolutionary War by Continental Marines has been deemed “under review” for its ‘level of racism’ by the EEOC.

In the 2016 EEOC decision “WL336-122-8“, the commission extended its reach of political correctness in the workplace on the basis of a January, 2014 formal complaint filed with the Commission, which alleged a man of African-American descent was subjected to racial discrimination. The complainant argued that his private employer unfairly discriminated against him by wearing a hat with the Gadsden Flag, which read the 241-year-old phrase “Don’t Tread on Me,” depicting the image of a rattlesnake.

The complainant found the cap offensive, as Christopher Gadsden, the initial creator of the design, was a “slave trader & owner of slaves.” It should be noted that management did previously order the worker to leave the hat out of the workplace, but the worker wore it anyway, and that an unnamed worker took a “photo without consent” of the complainant at work in September of 2013.

Complainant argued “[flag is a] historical indicator of white resentment against blacks stemming largely from the Tea Party.”

Though initially deciding that the Gadsden flag was originated through a non-racial context often associated in modern times with gun rights, the military, and the Tea Party, the Commission was made aware of two incidents specifically that they felt warranted further investigation. These include a 2014 attack on two police officers in Las Vegas by a White Supremacist group, wherein killers draped the officers’ bodies with the flags during a shooting spree, and a separate 2014 event wherein a firefighter in Connecticut felt he was racially discriminated against when the flag was displayed at the department, causing its subsequent removal.

In the decision by the EEOC, they didn’t step as far as specifically banning the Gadsden flag, but instead to hold-off until a later date to issue such a decision, as more research was required to determine the context and intentions of the person wearing the accessory. Therefore, if a similar case occurs again, the EEOC may very well ban the flag at the workplace entirely, raising certain questions about the modern uses and contexts relating to the flag’s usage, but also about the direction of our political outlook.

Questions? Comments? Do you feel the EEOC should ban the Flag, or is this an isolated incident that probably won’t occur again?

A breakdown in inter-office professionalism occurred when Deputy Public Defender Christina Behle of...

Child Support Through Direct Pay or Probation, Which Works for You?

It can often feel like modern life is the constant search for more time to spend on the things...